Transplantation of ovarian tissue is a valuable method to rescue mouse strains with fertility problems and to revitalize archived strains. The purpose of this study was to investigate the effect of (i) different sizes of transplanted ovary pieces on reproductive outcome, (ii) use of immunodeficient recipients to overcome the limitation of histocompatibility, and (iii) to compare different protocols for cryopreservation of ovarian tissue.

Pregnancy rate after transplantation of ovarian tissue was high (90–100%) independent of the transplant size. Although, the average litter size was significantly lower for recipients of quarters and eights (4.4 and 4.6 vs. 6.5), the total number of offspring produced per donor ovary was higher compared with recipients of halves. Pregnancy rate of immunodeficient recipients was 40% (mean 4.7 offspring per litter). All four cryopreservation protocols used were able to preserve functionality of the ovarian tissue. 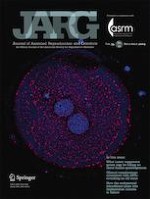 Prediction model for testis histology in men with non-obstructive azoospermia: evidence for a limited predictive role of serum follicle-stimulating hormone