Glioblastoma remains one of the most devastating human malignancies, and despite therapeutic advances, there are no drugs that significantly improve the patient survival. Altered expression of the Aurora kinases was found in different malignancies, and their inhibition has been studied in cancer therapy. In this study, we analyzed the expression of Aurora A and Aurora B in glioblastoma samples and also analyzed whether the effects of Aurora kinase inhibition were associated with temozolomide or not on cell lines and primary cultures of glioblastoma.

RT-PCR assays were used to determine the mRNA expression in glioblastoma tumor samples and in the cell lines. Cell proliferation was measured by XTT assay, and apoptosis was determined by flow cytometry. Drug combination analyses were made based in Chou-Talalay method. Gamma radiation for clonogenic survival used the doses of 2, 4 and 6 Gy. Changes in Aurora B level were assessed by Western blot analysis.

Aurora A and B were expressed in glioblastoma samples as well as in the glioblastoma cell lines (n = 6). Moreover, ZM447439, a selective Aurora kinase inhibitor, decreased the proliferation separately and synergistically with temozolomide in primary cultures and cell lines of glioblastoma. ZM also enhanced the effects of radiation on the two cell lines studied (U343 and U251), mainly when associated with TMZ in U343 cells. Treatment with ZM induced apoptotic cell death and diminished Aurora B protein level.

These data suggest that Aurora kinase inhibition may be a target for glioblastoma treatment and could be used as adjuvant to chemo- and radiotherapy. 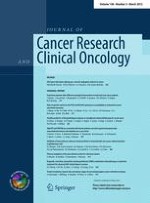