IκB kinase 2 (IKK2) is the primary catalytic subunit of the IKK complex. Activation of IKK phosphorylates the inhibitors of NF-κB (IκB), triggering the translocation of NF-κB.

Although IKK2 has been investigated in the inflammation-cancer transformation of gastric epithelium, its role in gastric cancer (GC) cells remained unexplored.

The IKK2 distribution and expression were measured by immunochemistry staining in clinical specimens. The proliferation, apoptosis, and migration of GC cells were analyzed after IKK2 expression intervention. Using Erk and β-catenin inhibitors, we investigated the relationship between IKK2 and Erk and β-catenin pathways. In the GC-burdened mice, we confirmed the effects of IKK2 inhibition on tumor growth.

Here, we found that IKK2 expression in the GC area was even higher than adjacent inflammatory area, and the GC patients with high expression of IKK2 showed worse overall and disease-free survival. Introduction of IKK2 inhibitor SC-514 inhibited the cell proliferation and induced apoptosis of SGC-7901 cells, in turn overexpression of IKK2 in MGC-823 cells showed the reverse effects. The proliferative activity of IKK2 on GC cells was dependent on the activation of β-catenin and Erk pathways. Additionally, IKK2 alteration affected the migration of GC cells. In vivo, IKK2 inhibition mitigated the tumor growth. Decreased expression of PCNA as well as an increase in cleaved caspase 3 and p53 were observed.

Our results indicate that IKK2 promotes the GC cell proliferation and inhibits their apoptosis, suggesting it may be a potential target for GC therapy. 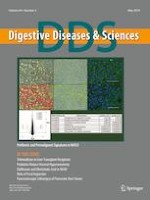 Prevalence of Small Intestine Carcinoid Tumors: A US Population-Based Study 2012–2017