Hypoxia-inducing factor-1 alpha (HIF-1α), is a major survival factor for tumor cells growing in a low oxygen environment. The anti-cancer agent imexon binds thiols and causes accumulation of reactive oxygen species (ROS) in pancreatic cancer cells. Unlike many cytotoxic agents, imexon is equi-cytotoxic in human MiaPaCa-2 and Panc-1 cells grown in normoxic (21% O2) and hypoxic (1% O2) conditions. Western blot analyses of imexon-treated cells demonstrated that imexon reduces HIF-1α protein levels in both normoxic and hypoxic conditions in a time- and concentration-dependant fashion. Gemcitabine did not similarly affect HIF-1α levels. Imexon did not reduce transcription of new HIF-1α mRNA, but did reduce the synthesis of new proteins, including HIF-1α, measured by 35S methionine/cysteine (Met/Cys) incorporation. Concurrently, the half-life of existing HIF-1α protein was increased by imexon, in association with a marked inhibition of chymotryptic activity in the 20S proteasome. The inhibition of HIF-1α translation was not specific, rather it was part of a general decrease in protein translation caused by imexon. This inhibitory effect on translation did not involve phosphorylation of eukaryotic initiation factor-2α (eIF-2α) and was not closely correlated to cell growth inhibition by imexon, suggesting that mechanisms other than protein synthesis inhibition contribute to the drug’s cytotoxic effects. In summary, imexon blocks the translation of new proteins, including HIF-1α, and this effect overcomes an increase in the stability of preformed HIF-1α due to proteasome inhibition by imexon. Because net HIF-1α levels are reduced by imexon, combination studies with other drugs affected by HIF-1α survival signaling are warranted. 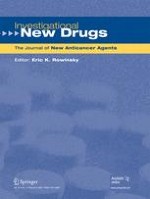 The effect of P-gp (Mdr1a/1b), BCRP (Bcrp1) and P-gp/BCRP inhibitors on the in vivo absorption, distribution, metabolism and excretion of imatinib

A phase I study of bortezomib, etoposide and carboplatin in patients with advanced solid tumors refractory to standard therapy