Electrical stimulation of the greater occipital nerve (GON) has recently shown promise as an effective non-pharmacological prophylactic therapy for drug-resistant chronic primary headaches, but the neurobiological mechanisms underlying its anticephalgic action are not elucidated. Considering that the spinal trigeminal nucleus (STN) is a key segmental structure playing a prominent role in pathophysiology of headaches, in the present study we evaluated the effects of GON electrical stimulation on ongoing and evoked firing of the dura-sensitive STN neurons. The experiments were carried out on urethane/chloralose-anesthetized, paralyzed and artificially ventilated male Wistar rats. Extracellular recordings were made from 11 neurons within the caudal part of the STN that received convergent input from the ipsilateral facial cutaneous receptive fields, dura mater and GON. In each experiment, five various combinations of the GON stimulation frequency (50, 75, 100 Hz) and intensity (1, 3, 6 V) were tested successively in 10 min interval. At all parameter sets, preconditioning GON stimulation (250 ms train of pulses applied before each recording) produced suppression of both the ongoing activity of the STN neurons and their responses to electrical stimulation of the dura mater. The inhibitory effect depended mostly on the GON stimulation intensity, being maximally pronounced when a stimulus of 6 V was applied. Thus, the GON stimulation-induced inhibition of trigeminovascular nociceptive processing at the level of STN has been demonstrated for the first time. The data obtained can contribute to a deeper understanding of neurophysiological mechanisms underlying the therapeutic efficacy of GON stimulation in primary headaches. 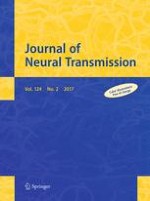 Structural brain imaging correlates of ASD and ADHD across the lifespan: a hypothesis-generating review on developmental ASD–ADHD subtypes