Metastasis is the most devastating aspect of cancer and it is the main cause of morbidity and mortality in cancer patients. Tumor cell adhesion to the vascular endothelial cell lining is an important step in metastatic progression and is prompted by platelets. Mucin 1 is over-expressed and aberrantly glycosylated in more than 60% of pancreatic ductal adeno-carcinomas, which mediate adhesion of pancreatic cancer cells to platelets via P-selectin. The anticoagulant low molecular weight heparins (LMWHs), which are commonly used in venous Thromboprophylaxis and treatment, appear to have an effect on cancer survival. The aim of this study is to investigate the effect of platelets on human pancreatic cancer MPanc96 cell adhesion to the endothelial cell vessel wall, and to examine the effect of heparin derivatives on MPanc96 adhesion using a novel, in vitro model of human umbilical cord vein. The modified heparin S-NACH (sulfated non-anticoagulant heparin), which is devoid of antithrombin (AT) binding and devoid of inhibition of systemic AT-dependent coagulation factors such as factor Xa and IIa, and the LMWH tinzaparin both potently reduced adhesion and invasion of fluorescence-labeled MPanc96 cancer cells to the endothelial layer of umbilical cord vein in a dose-dependent manner. S-NACH effectively inhibited P-selectin mediated MPanc96 cell adhesion, and inhibited cell adhesion and invasion similar to tinzaparin, indicating that systemic anticoagulation is not a necessary component for heparin attenuation of cancer cell adhesion, invasion, and metastasis. Also, S-NACH and tinzaparin versus unfractionated heparin, heparin derivatives enoxaparin, deltaparin, fraxiparin, and fondaparinux were evaluated for their effect on platelet-cancer cell adhesion. An in vivo anti-metastatic S-NACH-treated nude mouse model of MPanc96 pancreatic cancer cell metastasis demonstrated potent anti-metastasis efficacy as evidenced by IVIS imaging and histological staining. 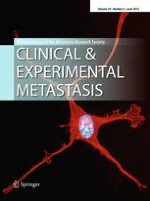