A recent development in gastrointestinal surgery is the implementation of enhanced recovery after surgery (ERAS) programs. Evidence regarding the benefit of these programs in patients undergoing esophageal surgery is scarce. We investigated the feasibility and possible benefit of a perioperative ERAS program in patients undergoing esophagectomy for malignant disease.

The ERAS program was initiated in 2009. Patients who underwent esophagectomy and were treated according to the ERAS program were included. Items of ERAS included preoperative nutrition, early extubation, early removal of nasogastric tube, and early mobilization. Primary outcome parameters were hospital stay and the incidence of postoperative complications. Outcome parameters in the ERAS cohort were compared to a cohort of patients who underwent surgical resection in the year prior to the implementation of the ERAS protocol. A feasibility analysis was performed among a sample of ERAS patients to determine the number of achieved items per patient.

Between 2008 and August 2010, 181 patients in our department underwent esophagectomy. Of these, 103 patients were included in the ERAS program (ERAS+ group) and were compared to 78 patients who had undergone an esophagectomy in 2008 (ERAS– group). Overall hospital stay was 14 days versus 15 days (ERAS+ and ERAS–, respectively; p = 0.013). There were no significant differences in the incidence of postoperative complications in either group. The percentage of achieved items varied between 42 and 93 % per item.

The implementation of an ERAS program in esophageal surgery was feasible and resulted in a small but significant reduction in overall hospital stay, whereas overall morbidity was not affected. 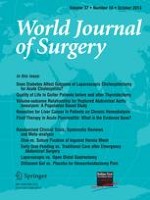 Quality of Life (QoL) in Patients With Benign Thyroid Goiters (Pre- and Post-Thyroidectomy): A Prospective Study