Road traffic crashes (RTCs) are a major cause of misery, disability and death globally, with a disproportionate number occurring in developing countries [ 1– 3]. The problem is increasing at a fast rate in developing countries due to rapid motorization and other factors [ 4]. In addition, while low-income and middle-income countries already account for more than 85% of all road traffic deaths in the world, the upsurge in the number of vehicles per inhabitant will result in an anticipated 80% increase in injury mortality rates between 2000 and 2020 [ 5]. It has been predicted that by 2020, road traffic injuries will rank as high as third among causes of disability adjusted life years (DALYs) lost [ 2, 5, 6].
Tanzania, a developing country in Africa, has witnessed at least a fivefold rise in recorded traffic-related fatalities during the last decade [ 7]. This in part is due to the proliferation of roads, which are often in poor states and also, a phenomenal increase in the number of motor vehicles, many of which are old, and not road-worthy. The increasing use of motorcycles particularly for commercial service is a source of concern in this regard because motorcycles cause many more fatal road crashes than other vehicles worldwide. As motorcycles are relatively unsafe vehicles, the riders must be considered as unprotected vehicle users and their injuries are usually severe [ 8].
Anzeige
The injury characteristics for road traffic crashes in developing countries differs in important ways from the profile seen in developed countries, and it can provide guidance for making policies to improve prevention and control. Pedestrians are most vulnerable to injury and death. This may be due to a number of factors, including lack of pedestrian facilities in road design, poor knowledge and practice of road safety measures by the general population, recklessness behaviour of motorists, high speed driving, and low levels of vehicle ownership. The high proportions of passenger fatalities appear to be associated with extensive use of public transport, types and condition of such vehicles and the driving skill of their operators [ 2, 9]. Addressing the risks of these groups will require multiple policy initiatives. To be effective, policies on traffic safety in developing countries must be based on local evidence and research, and designed for the particular group and economic circumstances found in developing countries [ 10].
In Sub-Saharan Africa including Tanzania, with increasing vehicular traffic, RTI has become an immense health problem and constitutes a burden on under-funded and oversubscribed health services [ 11, 12]. The reasons for the high burden of road traffic crashes in developing countries are: growth in the numbers of motor vehicles; higher number of people killed or injured per crash in low-income countries, poor enforcement of traffic safety regulations; inadequacy of health infrastructure, and poor access to health care [ 2, 7, 11, 12].
Injuries related to road traffic crashes contribute significantly to the number of trauma admissions at Bugando Medical Centre, taking out a significant number of lives and resources including consumables and the health worker time. However, despite this burden, there is little, if any, published information on RTCs in our local environment and the public policy responses to this problem have been muted, probably because of lack of local data regarding the problem. This study was conducted in order to provide baseline data to policy makers and other stakeholders who may wish to undertake interventions to improve road safety in the country.
The aim of this study therefore, was to describe the injury characteristics and outcome of road traffic crashes in our setting. The study provides basis for establishment of prevention strategies as well as treatment protocols.
Anzeige

This was a prospective hospital based study of road traffic crash patients of all age groups and gender presenting to the Accident and Emergency (A&E) department of Bugando Medical Centre (BMC) between March 2010 and February 2011. Bugando Medical Centre (latitude 2.52680 S; longitude 32.9062 E) is a 1000-bed, tertiary care and teaching hospital for the Catholic University of Health and Allied Sciences-Bugando, Mwanza, Tanzania (CUHAS). It is located in Mwanza city, along the shores of Lake Victoria in north-western Tanzania. Tanzania is located in East Africa between longitude, 29° and 41° east and latitude 1° and 12° south. Tanzania borders Kenya to the north, Rwanda, Burundi, and the Democratic Republic of Congo to the west, and Zambia, Malawi and Mozambique to the south. The total population in Tanzania was last reported at 43.2 million people in 2010. The hospital provides service to a population of approximately13 million people from its neighboring six regions in northwestern Tanzania (Mwanza, Mara, Kagera, Shinyanga, Kigoma and Tabora). There is no trauma centre or established advanced pre-hospital care in Mwanza city as a result all trauma patients are referred to BMC for expertise management.

Subjects for the study included all road traffic crash victims of all age groups and gender irrespective of injury severity who was managed at BMC during the study period and who consented for the study. Patients who failed to give proper information and those who had no relative to consent for the study were excluded from the study. Recruitment of patients to participate in the study was done at the A & E department. Patients were screened for inclusion criteria and those who met the inclusion criteria were, after informed consent to participate in the study, consecutively enrolled into the study.
All study patients were first resuscitated in the A & E department according to Advanced Trauma Life Support. From the A & E department patients were taken into the surgical wards or the intensive care unit (ICU) from where necessary investigations were completed and further treatment was instituted. Variables studied included demographic profile (age, sex, and occupation), mechanism of injury, prehospital care, contributing factors to RTC, injury arrival interval, trauma scores, body region injured, treatment offered, complications of treatment. Outcome variables were length of hospital stay, mortality and disability. The severity of injury was determined using the Kampala trauma score II (KTS II) [ 13]. Severe injury consisted of a KTS II ≤ 6, moderate injury 7-8, and mild injury 9-10. Patients with head injuries were classified according to Glasgow Coma Scale (GCS) into: severe (GCS 3-8), moderate (GCS 9-12) and mild (GCS 13-15). Depending on the type of injury, the patients were treated either conservatively or by surgery. All patients were followed up till discharged or death. This information was collected using a pre-tested questionnaire.

Statistical data analysis was done using SPSS software version 15.0. Data was summarized in form of proportions and frequent tables for categorical variables. Continuous variables were summarized using means, median, mode and standard deviation. P-values were computed for categorical variables using
Chi-square (χ 2) test and Fisher's exact test depending on the size of the data set. Independent student t-test was used for continuous variables. Multivariate logistic regression analysis was used to determine predictor variables that are associated with outcome. A p-value of less than 0.05 was considered to constitute a statistically significant difference.

The study was carried out after the approval by the department of surgery and BMC/CUHAS-Bugando ethics review board. An informed written consent was sought from patients or relatives.

Circumstances of the injury

Complications among the victims

A total of 484 complications were recorded in 398 patients giving a complication rate of 23.7%. Of these, wound sepsis was the most common complication accounting for 79.3% 0 f cases (Table 5).
Table 5
Complications among the victims
Anzeige

Of the 1678 patients, 1384 (82.5%) patients were alive. Of these, 1332(96.2%) patients were discharged well without permanent disability and the remaining 52(3.8%) patients were discharged with permanent disabilities such as limb amputations in 40 (23.8%) patients, permanent neurological deficit in 5 patients, severe spinal injuries with paraplegia in 4 patients, post-traumatic seizures in 2 patients and traumatic penile amputation in 1 patents. There were 294 deaths, accounting for an overall mortality rate of 17.5% (Figure 1).
×
The overall length of hospital stay (LOS) ranged from 1 day to 136 days with the mean of 23.5 ± 12.3 days. The median was 22.4 days. LOS for non-survivors ranged from 1 day to 34 days (mean 6.7 ± 1.4 days and median 5.6 days). The length of ICU stay ranged from 1 day to 38 days (mean = 8.9 ± 2.4 days, median 6.3 days). According to multivariate logistic regression analysis, patients who had severe trauma (Kampala Trauma Score II ≤ 6) and those with long bone fractures stayed longer in the hospital and this was significant (P < 0.001) whereas the age of the patient, severe trauma (Kampala Trauma Score II ≤ 6), admission Systolic Blood Pressure < 90 mmHg and severe head injury (Glasgow Coma Score = 3-8) significantly influenced mortality (P < 0.001).

The authors are grateful to our senior house officers in the Department of Surgery for their assistance in data collection and to all those who were involved in the care of our study patients.
This article is published under license to BioMed Central Ltd. This is an Open Access article distributed under the terms of the Creative Commons Attribution License ( http://​creativecommons.​org/​licenses/​by/​2.​0), which permits unrestricted use, distribution, and reproduction in any medium, provided the original work is properly cited. 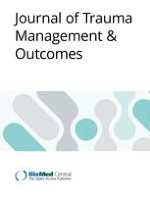 Implant removal of osteosynthesis: the Dutch practice. Results of a survey

The song remains the same although the instruments are changing: complications following selective non-operative management of blunt spleen trauma: a retrospective review of patients at a level I trauma centre from 1996 to 2007