Fungal PRRs can respond to internal and external components found in fungi. In addition, a number of fungal products, including some fungal allergens, seem to mimic or represent DAMPs. Collectively, activation of these fungal PRRs alerts the innate immune system to the presence of fungal exposure and can promote both innate and adaptive immune responses. 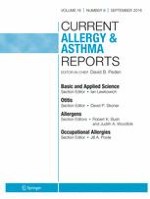 The Role of Breastfeeding in Childhood Otitis Media

Proteomics for Allergy: from Proteins to the Patients

Invited Commentary: Alpha-Gal Allergy: Tip of the Iceberg to a Pivotal Immune Response