The autonomic nervous system plays a role in a variety of liver regenerative and metabolic functions, including modulating bile secretion and cholangiocyte and hepatobiliary progenitors of the canals of Hering. However, the nature and location of nerves which link to the proximal biliary tree have remained uncertain. We investigate the anatomic relationship of nerves to the proximal biliary tree including the putative stem/progenitor cell niche of the canal of Hering. Using double immunostaining (fluorescence, histochemistry) to highlight markers of cholangiocytes (biliary-type keratins), nerves (S100, neurofilament protein, PGP9.5, tyrosine hydroxylase), and stellate cells (CRBP-1), we examined sections from normal adult livers from autopsy or surgical resections. There is extensive contact between nerves and interlobular bile ducts, bile ductules, and canals of Hering (CoH). In multiple serial sections from 4 normal livers, biliary-nerve contacts were seen in all of these structures and were more common in the interlobular bile ducts (78/137; 57%) than in the ductules and CoH (95/294; 33%) (p < 0.001). Contacts appear to consist of nerves in juxtaposition to the biliary basement membrane, though crossing through basement membrane to interface directly with cholangiocytes is also present. These nerves are positive for tyrosine hydroxylase and are, thus, predominately adrenergic. Electron microscopy confirms nerves closely approximating ductules. Nerve fiber–hepatic stellate cell juxtaposition is observed but without stellate cell approximation to cholangiocytes. We present novel findings of biliary innervation, perhaps mediated in part, by direct cholangiocyte-nerve interactions. The implications of these findings are protean for studies of neuromodulation of biliary physiology and hepatic stem/progenitor cells. 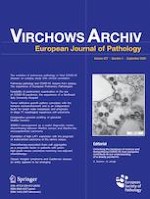 Classic Hodgkin lymphoma and Castleman disease: an entity appears to be emerging

Got nerve? Autonomic innervation of the human liver

Primary biliary adenosarcoma of the liver—a special and new entity