Mosquitoes of the genus Aedes are known vectors of pathogenic flaviviruses, and insect-specific flaviviruses (ISFs) have been detected in members of this genus in numerous parts of the world. In order to gain insight into whether Aedes mosquitoes in Greece are infected by flaviviruses, 1173 Aedes spp. mosquitoes collected in 2010 and 2012 were grouped in 53 pools and tested by RT nested PCR using flavivirus generic primers. Eight pools (15.09 %) were found to be PCR positive: five pools (5/53, 9.4 %) contained RNA sequences related to Ochlerotatus caspius flavivirus (OCFV), an ISF previously detected in the Iberian peninsula, two pools (2/53, 3.8 %) contained sequences related to a mosquito flavivirus detected in Aedes vexans (AeveV) in Italy and the Czech Republic, and one pool contained a DNA sequence that was too short to identify accurately. The highest OCFV prevalence (12.9 %) was observed in August 2010 in the regional unit of Thessaloniki. Similar sequences were later obtained from two Culex spp. pools collected in 2013 in the same regions. A genetic difference of 0.2-1.4 % was seen among the Greek OCFV strains, which differed by 2.2-4.1 % from the Iberian strains and by 6.2-11.1 % from the Finnish Hanko virus. The genetic distances among strains varied depending on the genome region (genes for E, NS3 and NS5 proteins), with NS3 being the most variable. The present study shows no evidence of infection of Aedes mosquitoes with known pathogenic flaviviruses, but it expands the geographic distribution of OCFV in the eastern Mediterranean area. Any implication of ISFs for public health (either directly or through interactions with other flaviviruses in the mosquitoes) remains to be elucidated. 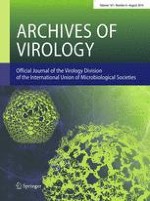 Prevalence and molecular characterization of human noroviruses and sapoviruses in Ethiopia

Beak and feather disease virus in wild and captive parrots: an analysis of geographic and taxonomic distribution and methodological trends

Influenza virus neuraminidase (NA): a target for antivirals and vaccines