Insights into the application of soccer-specific actions in established and new game forms of youth soccer | springermedizin.de Skip to main content
SUCHE MENÜ 1 2 3 4

Soccer is constantly changing regarding the demands of the new generation. At its best, young players develop outstanding technical and tactical skills as well as a wealth of competition experience. In addition to targeted training, maintaining motivation is one of the biggest challenges facing youth coaches. One possible way is to build their confidence while having fun. As a new game form, 3 vs. 3 unites the main events of the soccer game, challenges young players in a versatile manner, and promotes joy. In the present study, 23 games played in the new and 16 games played in the established competitive styles (7 vs. 7 and 6 vs. 6) were compared and analyzed regarding the variables passing, dribbling, shooting, and scoring. MANOVA revealed a significant effect for the factor game form: F(4,33) = 8.974, p < 0.001, η2 = 0.521. Additionally, post-hoc comparisons (using Sidak correction) indicated a significantly higher number for the occurrence of each game event in the new game form. This finding suggests an increased involvement. Child-friendly small-sided games (SSG; like the new game form) will help to promote children in the best way and inspire them to play soccer for a long time.

The study investigated 23 games played in the new and 16 games played in the established game form (i.e., n6vs.6 = 10 and n7vs.7 = 6) at soccer clubs in two federal soccer associations in Germany. All of the players were members of U7 teams in their local clubs and participated in both game forms in the present study. The new game rules were oriented toward the guidelines of Funiño (Wein, 2004b). The rules for the established game forms were used as defined by the respective local guidelines of the federal soccer associations. Local teams participated voluntarily in this experiment in Rostock (n = 2) and Cologne (n = 9). The overall playing time and the single match durations varied between the different game forms and locations. At Rostock both game forms (i.e., new and established) were played with a duration of 10 min at an organized festival and a local tournament, respectively. The new game form was played for 12 min in each game and the established for 40 min at Cologne within the local league system. The teams in the established game form consisted of ten players each. Five players formed the teams in the new game form at both locations.
Anzeige

The games were recorded by stationed commercially available cameras filming the pitches throughout the whole game (GoPro Hero 4, Woodman Labs Inc., San Mateo, CA, USA; Casio EX-FH100, Casio Electronics Co. Ltd., Japan; Panasonic HC-V110, Panasonic Corporation, Japan; SONY HDR-CX240E, Sony Group Corporation, Japan). The video material of the pitches was acquired from an elevated perspective. All relevant game events (e.g., successful passing, dribbling, shooting, and scoring) were identified during the video analysis at a standard personal computer. Passing was counted when a player passed the ball deliberately and successfully towards a teammate. Dribbling was defined as an active movement of a player keeping possession of the ball. Shooting was defined as a deliberate shot of a player towards the goal with the attempt to score. Scoring was counted when the ball fully crossed the goal line after a player’s shot on goal. The described game events were counted by students using VLC player version 3.0.8 using reduced playing speed and pause function to determine the relevant game events.

The data were recorded in a table, logging the game events in correspondence with the teams, game form, and overall game duration. The number of game events were normalized to the game events per minute by division of the number of game events from the playing time. The data were processed using IBM SPSS Statistics 25.
The data were normally distributed for all game events in both game forms, as assessed by the Shapiro–Wilk test (α > 0.05). One match of the game form 6 vs. 6 was identified as an outlier (three times higher standard deviation from the mean) with regard to the number of goals scored per minute and therefore excluded from data analysis.
The data were analyzed applying a Multivariate Analysis of Variances (MANOVA), because the analyzed game events are related to each other. Homogeneity of variances was asserted using Levene’s test, which showed that equal variances could be assumed for shooting (p = 0.373) and could not be assumed for passing (p = 0.043), dribbling (p = 0.000), and scoring (p = 0.018). The result was corrected by Pillai-Spur.
Anzeige

The aim of the present study was to compare technical differences between new and established game forms in youth soccer players at the U7 level. The main finding of this study was that players in the new game form pass, dribble, shoot, and score more frequently in comparison to players in established game forms.
The present study delivers evidence that with fewer players on a smaller pitch, the players, on average, are more involved in the game, because more game-specific actions take place. It can be speculated that a higher level of involvement leads to a higher motivation and much more excitement playing soccer. However, this assumption needs to be investigated in further studies which consider motivational aspects of the players.
In established game forms, many players do not really participate in the game for different reasons. However, in this age group, every player should more or less have the same amount of time on the pitch and try to improve his personal soccer skills and corresponding decision-making.
The German Soccer Association (DFB) proclaims a reform of the guidelines for young soccer players. The Projekt Zukunft (translation: Project Future) postulates a reformation of the playing conditions for athletes between 5 and 14 years (Bierhoff, 2019). The current study proves such statements derived from the practical knowledge of experienced coaches by empirical data.
Halouani, Chtourou, Gabbett, Chaouachi, and Chamari (2014) described in their review that there is only little information about the improvement of technical and tactical skills in team sports. The present data suggest that the motivation of young soccer players to practice their skills in SSG such as in the new game form is higher as compared to established game forms. In addition, the trained physiological parameters also benefit from a lower number of involved players (Halouani et al., 2014).
Moreover, Ford, Yates, and Williams (2010) delivered evidence that approximately 64% of the available time in training is used for training forms and approximately 36% of that time for playing forms for players of different ages (i.e., 9, 13, and 16 years) and different skill levels (i.e., elite, sub-elite, and recreational). The playing forms in youth soccer training are presented by SSG to 15.3% during the training, and larger games to 24.8% at the end of a training session (O’Connor, Larkin, & Williams, 2018). This ratio can be explained by the use of larger game forms during competition that will be played at the end of training sessions to simulate competition. Our results give rise to the fact that SSG (i.e., 3 vs. 3 or Funiño) in early soccer training (U7) will foster the development of teams regarding the technical-tactical skills and abilities if it is played as the competitive game form. Consequently, if 3 vs. 3 (i.e., Funiño) is played in a competitive format, coaches will develop their training towards this format accordingly; more playing time in this format is realized and youth soccer players (U7) execute more technical-tactical actions to develop new skills and find new tactical solutions by active decision-making activities (Roca & Ford, 2020). In addition, soccer-specific technical skills are developed by playing SSG without any loss in physical adaptation processes (i.e., improvement in the peak power and total work capacity; Radziminski, Rompa, Barnat, Dargiewicz, & Jastrzebski, 2013). Thus, the trend regarding more decision-making activities in training will be further emphasized by a change in the competitive game format from 6 vs. 6 or 7 vs. 7 to Funiño (i.e., 3 vs. 3).
The pilot phase of the reorganization of used game forms in children’s soccer in terms of new game form tournaments is a first and remarkable step to evolution of an enthusiastic and excited community of young soccer players in Germany. More studies like the present one should provide scientific legitimacy for these upcoming changes in German youth soccer. The present study delivers first insights into the establishment of new game forms played with two goals for each team. Nevertheless, it is the first approach in Germany to compare the impact of environmental conditions (i.e., field size, more than one goal, number of players, etc.) on players’ behavior. Thus, it remains unclear whether physiological and team tactics will evolve properly towards the adult soccer game. In addition, it seems fruitful to investigate the impact of the game form on the performance of each individual player in further studies to verify how much benefit each player has from the different game forms.
Our main limitations are the differences in the number of games, teams, and playing times at different locations. However, we used a standardized procedure to examine the game forms in advance of the data acquisition. All raters have been educated regarding the definition of the game events by the principal investigators. Thus, all got the same briefing. Moreover, the investigated game events were clearly defined as they are described in the manuscript. The definitions remained constant throughout the whole study. Additionally, the raters’ performance was cross-checked by the principal investigators using another set of video sequences from 5 vs. 5 in youth soccer. We aimed to standardize the raters’ observation performance between the different locations by this procedure.
In this way we succeeded in observing the most important variables in soccer. By including all matches and data, we were able to draw a comprehensible comparison between new (3 vs. 3) and established game forms (6 vs. 6 and 7 vs. 7). In future investigations, we would like to consider a larger sample and focus on the methodological weaknesses such as the missing analysis of inter-rater reliability.

We acknowledge the support by the students Ole Ludwig, Anne-Susan Siercks, Nils Funken, and Yannik Schröder for their support during data acquisition at Rostock and Cologne.

The authors acknowledge financial support by the Deutsche Forschungsgemeinschaft (German Research Foundation) and the University of Rostock within the funding program Open Access Publishing. The funders had no role in study design, data collection and analysis, decision to publish, or preparation of the manuscript. 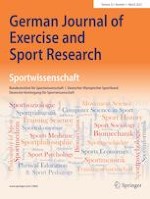 Defining “elite” status in sport: from chaos to clarity