With the current epidemic of diagnosed pancreatic cystic neoplasms on the rise, a substantial amount of work has been done to unravel their biology, thus leading to implications on clinical decision making. Recent genetic profiling of resected human specimens has identified alterations in signaling pathways involving KRAS and GNAS signaling as early events in the pathogenesis of intraductal pancreatic mucinous neoplasms. Progressively, mutations in genes such as TP53, SMAD4, RNF43, and others are thought to characterize invasive and advanced lesions. The role of inflammation in fueling the growth and transformation of these cysts has also begun to be studied with greater interest. A number of promising clinical studies have attempted to integrate these genetic insights into classifying these cysts and treating patients. We have reviewed existing literature on similar lines besides commenting on some useful animal models that recapitulate molecular and phenotypic progression of these cysts. 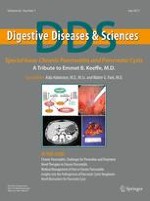 Chronic Pancreatitis: Current Status and Challenges for Prevention and Treatment