To investigate the changes in spherical equivalent and pupil response during near viewing in patients with intermittent exotropia (IXT) who have complaints of blurred vision or asthenopia from near viewing in daily life using a novel binocular wavefront aberrometer.

Ten IXT patients and ten healthy subjects wearing full-correction lenses at far sight (5 m) were instructed to fixate on a near target at 67 cm, which was then moved to 40 cm three times. Serial changes in the spherical equivalent (SE) refractive error (SE) were measured during this task using a laboratory-made open-field binocular Hartmann–Shack wavefront aberrometer and compared between patients and healthy subjects. In the IXT patients, regression analysis was performed between ∆SE and exodeviation angles, as measured by an alternate prism and cover test. Pupil-diameter and pupil-constriction ratios were also compared between patients and healthy subjects, and the correlation of constriction ratio with ∆SE was calculated for both groups.

Insufficient accommodation and pupil constriction during near viewing were observed in patients with IXT who had complaints of blurred vision or asthenopia from near viewing. These conditions might contribute to symptoms, such as fatigue, eye strain and impaired visual performance. 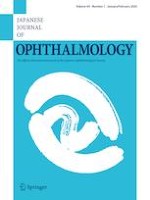 Effectiveness of intraoperative iodine in cataract surgery: cleanliness of the surgical field without preoperative topical antibiotics