Using the Echantillon Généraliste de Bénéficiaires: random 1/97 permanent sample of the French national healthcare insurance system database (EGB), we investigated whether, as previously suspected, the risk of cancer in insulin glargine (A21Gly,B31Arg,B32Arg human insulin) users is higher than in human insulin users. The investigation period was from 1 January 2003 to 30 June 2010.

We used Cox proportional hazards time-dependent models that were stratified on propensity score quartiles for use of insulin glargine vs human insulin, and adjusted for insulin, biguanide and sulfonylurea possession rates to assess the risk of cancer or death in all or incident exclusive or predominant (≥80% use time) users of insulin glargine compared with equivalent human insulin users. 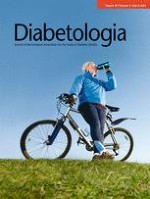 Pathogenic role of mast cells in the development of diabetic nephropathy: a study of patients at different stages of the disease

Socioeconomic factors, rather than diabetes mellitus per se, contribute to an excessive use of antidepressants among young adults with childhood onset type 1 diabetes mellitus: a register-based study