There have been recent attempts to characterize the mechanisms associated with fatigue-induced task failure. We compared the time to failure and the corresponding changes in the surface electromyogram (EMG) during sustained maximal and submaximal isometric force tasks.

EMG activity was measured from the biceps brachii of 18 male participants as they sustained either a maximal or submaximal (60 % MVC) isometric contraction of the dominant elbow flexors until force could not be maintained above 55 % MVC.

Intensity-dependent patterns of change were observed for EMG amplitude and mean power frequency (MNF) between the two force tasks. Interestingly, the only significant predictor of failure time was the rate of change in EMG MNF during the submaximal task (r 2 = 0.304). In addition, EMG amplitude at submaximal failure was significantly lower (p < 0.05) than the values obtained during MVC.

The patterns of EMG response emphasize the basis of neuromuscular fatigue and task dependency. Additionally, our data suggest that the EMG MNF should be used when monitoring the progression of local muscle fatigue. 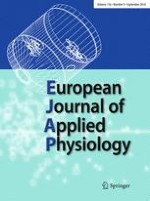 Metabolic responses to whole-body vibration: effect of frequency and amplitude

Does the type of visual feedback information change the control of standing balance?

Comparison of muscle activity and tissue oxygenation during strength training protocols that differ by their organisation, rest interval between sets, and volume