The possible existence of inter-claustral and cortico-claustral contralateral pathways might provide the morphological basis for the complex functional phenomena observed in previous studies. Furthermore, these connections might have several important clinical implications, since they might explain how the inter-hemispheric coordination governed by the claustrum, as well as the functional recovery subsequent to damages involving one claustrum, takes place. 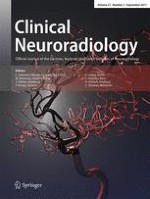 The Derivo Embolization Device, a Second-Generation Flow Diverter for the Treatment of Intracranial Aneurysms, Evaluated in an Elastase-Induced Aneurysm Model

Radiological Findings of Two Sisters with Aceruloplasminemia Presenting with Chorea