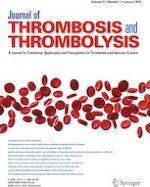 Intravenous thrombolysis for ischemic stroke in the Veneto region: the gap between eligibility and reality