The nucleus reuniens (RE) and entorhinal cortex (EC) provide monosynaptic excitatory inputs to the apical dendrites of pyramidal cells and to interneurons with dendrites in stratum lacunosum moleculare (LM) of hippocampal field CA1. However, whether the RE and EC inputs interact at the cellular level is unknown. In this electrophysiological in vivo study, low-frequency stimulation was used to selectively activate each projection at its origin; field excitatory postsynaptic potentials (fEPSPs) were recorded in CA1. We applied (1) paired pulses to RE or EC, (2) combined paired pulses to RE and EC, and (3) simultaneously paired pulses to RE/EC. The main findings are that: (a) stimulation of either RE- or EC-evoked subthreshold fEPSPs, displaying paired pulse facilitation (PPF), (b) subthreshold fEPSPs evoked by combined stimulation did not display heterosynaptic PPF, and (c) simultaneous stimulation of RE/EC resulted in enhanced subthreshold fEPSPs in proximal LM displaying a nonlinear interaction. CSD analyses of RE/EC-evoked depth profiles revealed a nonlinear enlargement of the ‘LM sink-radiatum source’ configuration and the appearance of an additional small sink–source pair close to stratum pyramidale, likely reflecting (peri)somatic inhibition. The nonlinear interaction between both inputs indicates that RE and EC axons form synapses, at least partly, onto the same dendritic compartments of CA1 pyramidal cells. We propose that low-frequency activation of the RE-CA1 input facilitates the entorhinal-hippocampal dialogue, and may synchronize the neocortical-hippocampal slow oscillation which is relevant for hippocampal-dependent memory consolidation. 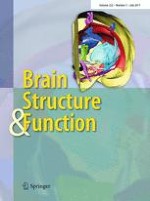 Semaphorin3A–neuropilin1 signalling is involved in the generation of cortical interneurons