Mild infection may trigger sudden death in the vulnerable infant by cytokine interactions with a compromised medullary serotonergic (5-HT) system, leading to disrupted cardiorespiratory regulation and sleep-related sudden death. The cytokine interleukin (IL)-6 is elevated in the cerebrospinal fluid in SIDS. We tested the hypothesis that the expression of IL-6 receptors (IL-6R) and/or gp130 (involved in IL-6R signaling) is altered in the medullary 5-HT system in SIDS. Immunohistochemistry of IL-6R and gp130 was performed on medullae from 25 SIDS infants, 20 infectious deaths, and 14 controls using a semi-quantitative grading system. In the SIDS cases, mean IL-6R intensity grade in the arcuate nucleus (major component of medullary 5-HT system) was significantly higher than in the control group (2.00 ± 0.07 vs. 1.77 ± 0.08, P = 0.04), with no other differences in IL-6R or gp130 expression at any other site. Arcuate 5-HT neurons expressed IL-6R, indicating a site of IL-6/5-HT interaction. In SIDS, IL-6R expression is abnormal in the arcuate nucleus, the putative human homolog of rodent ventral medullary chemosensitivity sites involving 5-HT. Aberrant interactions between IL-6 and the arcuate nucleus may contribute to impaired responses to hypercapnia generated by infection (hyper-metabolism) combined with rebreathing. 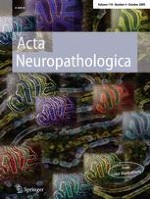 Type and frequency of IDH1 and IDH2 mutations are related to astrocytic and oligodendroglial differentiation and age: a study of 1,010 diffuse gliomas

Primary leptomeningeal oligodendroglioma with documented progression to anaplasia and t(1;19)(q10;p10) in a child