Internal fixation of the traumatic diastasis of symphysis pubis is an integral part of the definitive management of pelvic ring injuries. Both functional outcome and long term physiological effects of plate retention have not been clearly addressed and no specific indications regarding implant removal have been proposed in the literature.

We reviewed 74 patients (18 females and 56 males), with an average age of 40.6 (16–75) years, who underwent open reduction and internal fixation (ORIF) of the pubic symphysis. Except from the demographic data many other parameters like suprapubic pain, sexual disturbance, impotence and dyspareunia were taken under consideration. Furthermore, any correlation between implant failure and functional impairment was recorded and the subject of implant removal in pregnant women was examined. Health outcome was assessed according to EuroQol 5-D (EQ-5D) questionnaire. Mean follow up: 41.7 (28–89) months.

Suprapubic pain was present in ten patients. Three men developed neurogenic impotence and one woman had deep dyspareunia. None of these symptoms were related to implant status. Three of the four females who had uncomplicated pregnancy in the post-stabilization period had the plate in situ. Implant failure was seen in four patients but they remained asymptomatic. EQ-5D questionnaire revealed high satisfaction scores among young women and men of all age groups.

This study supports the view that routine removal of the plate is not essential. The issue of whether the implant needs to be removed in women of childbearing age requires further investigation. 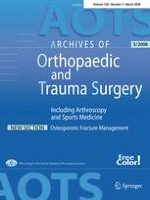 Viscosupplementation in the hip: evaluation of hyaluronic acid formulations

Nonoperative treatment for a double dislocation of the thumb metacarpal: a case report