International registry on the use of the CytoSorb® adsorber in ICU patients | springermedizin.de Skip to main content
TOOLBAR 1 2 3 4
SUCHE MENÜ 1 2 3 4

The online version of this article (https://​doi.​org/​10.​1007/​s00063-017-0342-5) includes (1) flowcharts and data content in the eCRF, (2) severity scores, (3) criteria defining sepsis and septic shock, and (4) abbreviations. The article and the appendix are available at http://​www.​springermedizin.​de/​mk-im. The appendix can be found at the end of the article under “Supplementary material”.

The aim of this clinical registry is to record the use of CytoSorb® adsorber device in critically ill patients under real-life conditions.

The registry records all relevant information in the course of product use, e. g., diagnosis, comorbidities, course of the condition, treatment, concomitant medication, clinical laboratory parameters, and outcome (ClinicalTrials.gov Identifier: NCT02312024). Primary endpoint is in-hospital mortality as compared to the mortality predicted by the APACHE II and SAPS II score, respectively.

This third interim report demonstrates the feasibility of the registry with excellent data quality and completeness from 20 study centers. The results must be interpreted with caution, since the numbers are still small; however the disease severity is remarkably high and suggests that adsorber treatment might be used as an ultimate treatment in life-threatening situations. There were no device-associated side effects. 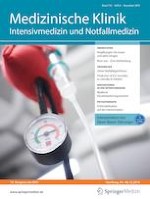