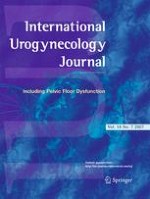 Urinary hesitancy and retention during treatment with sertraline

The effects of duloxetine on urethral function and sphincter morphology

Quality of life after surgery for genital prolapse in elderly women: obliterative and reconstructive surgery

In the footsteps of Kelly and Robertson; revival of the art of cystourethroscopy in gynecology