The tumor microenvironment is a determining factor for cancer biology and progression. Sphingosine-1-phosphate (S1P), produced by sphingosine kinases (SphKs), is a bioactive lipid mediator that regulates processes important for cancer progression. Despite its critical roles, the levels of S1P in interstitial fluid (IF), an important component of the tumor microenvironment, have never previously been measured due to a lack of efficient methods for collecting and quantifying IF. The purpose of this study is to clarify the levels of S1P in the IF from murine mammary glands and its tumors utilizing our novel methods. We developed an improved centrifugation method to collect IF. Sphingolipids in IF, blood, and tissue samples were measured by mass spectrometry. In mice with a deletion of SphK1, but not SphK2, levels of S1P in IF from the mammary glands were greatly attenuated. Levels of S1P in IF from mammary tumors were reduced when tumor growth was suppressed by oral administration of FTY720/fingolimod. Importantly, sphingosine, dihydro-sphingosine, and S1P levels, but not dihydro-S1P, were significantly higher in human breast tumor tissue IF than in the normal breast tissue IF. To our knowledge, this is the first reported S1P IF measurement in murine normal mammary glands and mammary tumors, as well as in human patients with breast cancer. S1P tumor IF measurement illuminates new aspects of the role of S1P in the tumor microenvironment. 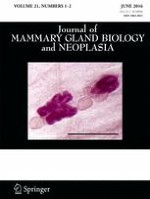 Erratum to: A Comparative Study on the In Vitro Effects of the DNA Methyltransferase Inhibitor 5-Azacytidine (5-AzaC) in Breast/Mammary Cancer of Different Mammalian Species

A Molecular View of Pathological Microcalcification in Breast Cancer

Binuclear Cells in the Lactating Mammary Gland: New Insights on an Old Concept?