Hepatopulmonary syndrome (HPS) is characterized by impaired oxygenation due to pulmonary vascular dilatation in patients with end-stage liver disease. At our center, we identified 29 patients who were listed for liver transplantation (LT) with a model for end-stage liver disease exception for HPS between 2001 and 2012. Five of these patients were found to have concurrent interstitial lung disease (ILD). The chest high-resolution computed-tomography demonstrated ground-glass opacities and subpleural reticulation, most consistent with nonspecific interstitial pneumonia (NSIP). All four of our patients who underwent LT experienced prolonged hypoxemia postoperatively, with one surgery-related death. However, the three surviving patients had eventual resolution of their hypoxemia with no evidence of ILD progression. In conclusion, we report a high prevalence of ILD, most consistent with NSIP, among patients with HPS. Although there may be increased perioperative risks, the finding of ILD in patients with HPS should not be considered an absolute contraindication to LT. 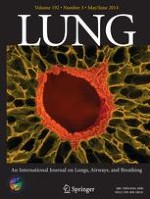 SS18-Bronchial Biphasic Synovial Sarcoma in an Octogenarian with Hemothorax

Economic Evaluation of Exercise Training in Patients with Pulmonary Hypertension