Intra-articular ganglia and cysts of the knee joint are rare and mostly incidental findings in MRI and arthroscopy. During a period of 15 years, nearly 8,000 knees were arthroscopically examined. In total, 85 intra-articular soft tissue masses were found within the knee cavity. Of these, 76 were incidental and asymptomatic findings in arthroscopy performed for treatment of osteoarthritic symptoms. Several repeated minor knee traumata were reported in this group but no histories of serious traumatic events. Nine ganglion cysts were obviously solely responsible for the intermittent or chronic non-specific knee discomfort, and classified as symptomatic. There were no histories of previous injury to the knees, no clinical signs of instabilities or meniscal and femoropatellar pathologies, and no associated further intra-articular lesions in arthroscopy. Forty-nine cystic masses originated from the ACL, 16 from the PCL, 12 from the anterior (eight medial, four lateral) and three from the posterior horn of the menisci (two medial, one lateral). Three were located in the infrapatellar fat pad, one arose from a medial plica and one from a subchondral bone cyst. All ganglion cysts were successfully resected or excised using arthroscopic technique. A review of the literature is given and compared with the findings and data of this study. 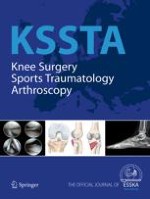