Cell oxygenation and nutrition are crucial for the viability of tissue-engineered constructs, and different alternatives are currently being developed to achieve an adequate vascularisation of the engineered tissue. One of the alternatives is the generation of channel-like patterns in a bioconstruct. Here, the formation of full-formed channels inside hydrogels by laser-induced cavitation was investigated. A near-infrared, femtosecond laser beam focused with a high numerical aperture was employed to obtain intra-volume modifications of a block of gelatine hydrogel. Characterisation of the laser-processed gelatine was carried out by optical microscopy and epifluorescence microscopy right after and 24 h after the laser process. Rheology analyses on the unprocessed gelatine blocks were conducted to better understand the cavitation mechanism taking place during the intense laser interaction. Different cavitation patterns were observed at varying dose values by changing the repetition rate and the overlap between successive pulses while keeping the laser fluence and the number of passes fixed. This way, cavitation bubble features and behaviour can be controlled to optimise the formation of intra-volume channels in the gelatine volume. Results showed that the generation of fully formed channels was linked to the formation of large non-spherical cavitation bubbles during the laser interaction at high dose and low repetition rates. In conclusion, the formation of fully formed channels was made possible with a near-infrared, femtosecond laser beam strongly focused inside gelatine hydrogel blocks through laser-induced cavitation at high dose and low repetition rates.
Anzeige 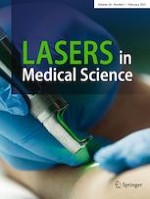 The efficacy of fractional carbon dioxide laser combined with narrow-band ultraviolet B phototherapy for non-segmental vitiligo: a systematic review and meta-analysis

The effect of low-level laser therapy as an adjunct to periodontal surgery in the management of postoperative pain and wound healing: a systematic review and meta-analysis