Monitoring of intraoperative core temperature is strongly recommended to reduce the risk of perioperative thermic imbalance and related complications. The zero-heat-flux sensor (3M Bair Hugger Temperature monitoring system, ZHF), measures core temperature in a non-invasive manner. This study was aimed at comparing accuracy and precision of the ZHF sensor compared to the esophageal thermometer. Patients scheduled for major elective abdominal or urologic surgery were considered eligible for enrollment. Core body temperature was measured using both an esophageal probe (TESO) and a ZHF sensor (TZHF) every 15 min from induction until the end of general anaesthesia. A Bland–Altman plot for repeated measures was performed. The proportion of measurements within ± 0.5 °C was estimated; from a clinical point of view, a proportion greater than 90% was considered sufficiently accurate. Lin’s concordance correlation coefficient (CCC) for repeated measures were calculated. To evaluate association between the two methods, a generalized estimating equation (GEE) simple linear regression model, was elaborated. A GEE multiple regression model was also performed in order to adjust the estimate of the association between measurements from surgical and patient’s features. Ninety-nine patients were enrolled. Bland–Altman plot bias was 0.005 °C with upper and lower limits of agreement for repeated measures of 0.50 °C and − 0.49 °C. The percentage of measurements within 0.5 °C of the reference value was 97.98% (95% confidence interval 92.89–99.75%), indicating a clinically sufficient agreement between the two methods. This was also confirmed by a CCC for repeated measures of 0.89 (95% CI 0.80 to 0.94). The GEE simple regression model (slope value of 0.77) was not significantly influenced by any patient or surgical variables. According to GEE multiple regression model results, the explored patient- and surgery-related variables did not influence the association between methods. ZHF sensor has shown a clinically acceptable accuracy and precision for body core temperature monitoring during elective major surgery. 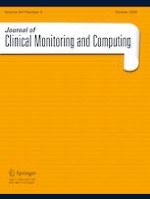 Quantitative sensory testing to evaluate and compare the results after epidural injection and simple discectomy, in patients with radiculopathy secondary to lumbar disc herniation

Physiological abnormalities in patients admitted with acute exacerbation of COPD: an observational study with continuous monitoring

Tidal volumes: cold and dry or warm and humid, does it matter?