We measured intraoperative parathyroid hormone (IOPTH) levels before and after thyroidectomy in a large group of patients to test whether changes in IOPTH can predict postoperative tetany. Subjects were 111 consecutive patients (94 females and 17 males) with Graves’ disease undergoing subtotal thyroidectomy. Blood samples for IOPTH assay were obtained after anesthesia (basal) and following skin closure (postoperative). Data were compared between patients who developed tetany (n = 9) and those who did not (n = 102). There was no significant difference in sex, age, period of antithyroid drug administration, or the weight of the thyroid between the two groups. The preoperative serum calcium level was significantly lower (p < 0.05) and the basal IOPTH significantly higher (p < 0.05) in the tetany group than in the non-tetany group. The IOPTH level was significantly lower (p < 0.005) and the average percent decrease in IOPTH levels was higher (p < 0.001) in the tetany group than in the non-tetany group. A decrease in IOPTH of more than 70% was shown to be 78% sensitive, 94% specific, and 93% accurate, and it has 78% positive predictive value and 94% negative predictive value for the development of tetany. Our study shows that a postoperative decrease of IOPTH level is the most predictive of postoperative tetany of the clinical risk factors investigated. We recommend IOPTH measurement as an adjunct to postoperative management of patients with Graves’ disease to assist in preventing hypocalcemia and determining the earliest time for safe discharge. 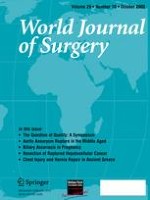 How are Volume–Outcome Associations Related to Models of Health Care Funding and Delivery? A Comparison of the United States and Canada

The Question of Quality