Prosthetic incisional hernia repair (PIHR) is superior to primary closure in preventing hernia recurrence. Serious complications have been associated with the use of prosthetic material. Complications of subsequent surgical interventions after prior PIHR in relation to its anatomical position were the objectives of this study.

Patients who underwent subsequent laparotomy/laparoscopy after PIHR between January 1992 and February 2005 at our institution were evaluated. Intraperitoneal and preperitoneal mesh was related to complication rates after subsequent surgical interventions. 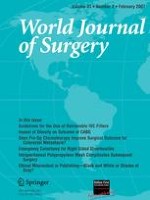 Impact of Methicillin-resistant Staphylococcus aureus Infection on Outcome after Esophagectomy