Gestational diabetes is associated with increased risk to the health of the mother and her offspring. In particular, the infants of diabetic mothers (IDMs) exhibit elevated levels of preterm birth, macrosomia, hypoglycemia, hypocalcemia, and cardiomyopathy. We have previously reported that IDMs showed abnormalities in cardiac Akt-related insulin signalling, and that these deficiencies in Akt-related signalling were attenuated by supplementing the maternal diet with fish-oil. Herein, we investigated whether the eicosapentaenoic acid (EPA) found in fish oil can be used to attenuate diabetes associated impairments in cardiomyocyte signalling.

Pregnant diabetic rats were administered streptozotocin before receiving EPA or water, and their infants were designated IDM/EPA, IDM/W. We assessed the potential molecular pathway for this effect in the primary cardiac cell from newborn rat hearts.

Insulin resistance as determined by diminished GLUT4 translocation following insulin stimulation, the levels of advanced glycation end products (AGEs) and reactive oxygen species were elevated in the neonatal hearts of IDM/W compared with that seen in the offspring born from non-diabetic control animals. Similarly, the receptor of AGEs (RAGE) mRNA levels, reactive oxygen species and the amount of nuclear factor-κB (NF-κB), tumor necrosis factor-α (TNF-α), and interleukin 6 (IL-6) mRNA were higher in the hearts from the IDM/W when compared to that observed in the hearts of offspring born to non-diabetic animals. These deleterious effects of gestational diabetes were significantly decreased in the offspring of diabetic mothers receiving EPA supplementation.

Taken together, our data suggest that the EPA in fish oil may improve the impaired signalling and the excessive protein glycation in the cardiac muscles of infants exposed to intrauterine hyperglycemia. 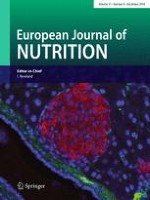 The effects of ‘activating’ almonds on consumer acceptance and gastrointestinal tolerance

Association between dietary zinc intake and mortality among Chinese adults: findings from 10-year follow-up in the Jiangsu Nutrition Study