The purpose of this study was to evaluate the feasibility of intravoxel incoherent motion (IVIM) imaging and its value in differentiating the histologic grade among human gliomas.

The IVIM model generated parametric images for apparent diffusion coefficient ADC, slow diffusion coefficient D (or D slow), fast diffusion coefficient D* (or D fast), and fractional perfusion-related volume f in 22 patients with gliomas (WHO grade II–IV) using monopolar Stejskal–Tanner diffusion-weighted imaging (DWI) scheme and 14 b values ranging from 0 s/mm2 to a maximum of 1,300 s/mm2. A region-of-interest analysis on the tumor as well as in the white matter was conducted. The parameter values were tested for significant differences. The repeatability of the measurements was tested by coefficient of variation and Bland–Altman plots.

D, D*, and f in the high-grade gliomas demonstrated significant differences compared to the healthy white matter. D* and f showed a significant difference between low- and high-grade gliomas. D tended to be slightly lower in the WHO grade II compared to WHO grade III–IV tumors. f and D* demonstrated higher coefficients of variation than the ADC and D in tumor. The Bland–Altman plots demonstrated satisfactory results without any outliers outside the mean ± 1.96 standard deviation.

The IVIM-fitted post-processing of DWI-signal decay in human gliomas could show significantly different values of fractional perfusion-related volume and fast diffusion coefficient between low- and high-grade tumors, which might enable a noninvasive WHO grading in vivo. 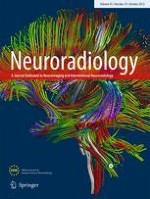 Effects of chemotherapy on the brain in childhood: diffusion tensor imaging of subtle white matter damage