Asthma is one of the important chronic diseases. The asthma prevalence is increasing in last decades. Despite the presence of good controller drugs like corticosteroids, about 60% of asthmatic patients use alternative medicine. This study was done to determine the effectiveness of Tregonella foenum graceum (fenugreek) seeds in mild asthma.

It is a double blind trial with placebo effect. One of the ancient prescriptions from Persian Medicine was selected. The participants were divided to three groups randomly. On group received fenugreek syrup one received honey syrup and the third received placebo. Duration of treatment was 4 weeks. Quality of life, Lung function tests and IL-4 levels were evaluated before and after treatment.

From 90 participants to study 79 completed the process. After study there was significant increase in quality of the life and lung function tests and IL-4 levels in fenugreek and honey groups. 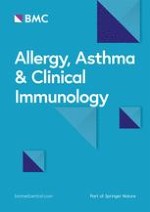 Unintentional injection to the bone with a pediatric epinephrine auto-injector

The law of food allergy and accommodation in Canadian schools

Rash induced by enteral vancomycin therapy in an older patient in a long-term care ventilator unit: case report and review of the literature