To examine the roles of loneliness and clinician- and self-rated depressive symptoms as predictors of the subjective quality of life (QoL) in psychosis.

This cross-sectional study was conducted on a sample of 207 patients diagnosed with psychotic disorders. They were assessed with self-reported measures of QoL, loneliness and depression and with clinician-rated measures of depression and overall psychopathology. Multiple indicators multiple causes (MIMIC) modeling was used to analyze the data.

Therapeutic programs aiming to enhance the QoL of people with psychotic disorders should incorporate interventions targeting both loneliness and depression and need to be tailored to the clinical status of patients. The emphasis on alleviating loneliness should be placed first of all in the case of those with low levels of depression, among whom the negative impact of loneliness on QoL is especially strong. Researchers should be aware that the method chosen for assessing depressive symptoms in models predicting QoL in psychosis matters. 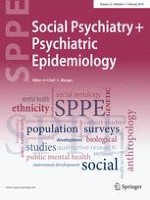 Potentially traumatic events have negative and positive effects on loneliness, depending on PTSD-symptom levels: evidence from a population-based prospective comparative study

Occupational class and the changing patterns of hospitalization for affective and neurotic disorders: a nationwide register-based study of the Finnish working-age population, 1976–2010