The investigation of sudden death of infants varies, and death rates may depend on local practices of death certification. We studied the extent of the investigation and the final cause of death (COD) in 3 regions: New York, New York, USA (NY); King County, Washington, USA (KC); and Montevideo, Uruguay (MU). We conducted a retrospective review of 543 cases (NY 258, KC 56, MU 229) of previously healthy babies who died suddenly without obvious trauma, at ages 0 to 12 months, over a 3-year period (1998 to 2001). All cases included a complete autopsy and histologic examination. Cases were assessed for completion of special studies (including radiographs, photos, toxicology and metabolic sampling, cultures, and vitreous humor chemistry), measurements, and scene investigation. Specialized pediatric measurements and testing were done less often than routine procedures, and were done less often in cases overall compared with cases certified as sudden infant death syndrome (SIDS). Fifty-five percent of SIDS cases in NYC and 12% of SIDS cases in KC had no scene investigation. Manhattan had a complete workup in 42% of SIDS cases, whereas the remaining sites had fewer that 15% of cases completely worked up. The most common non-natural COD was suffocation at all 3 sites. The overall most common COD were respiratory infection in MU (22%) and SIDS in NY (45%) and KC (86%). We conclude that the sudden death of infants requires special consideration and still lacks consistency. SIDS investigations are not done completely in all cases and rates may depend on regional differences in certifying infant deaths. 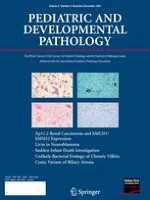 Partly Molar Pregnancies That Are Not Partial Moles: Additional Possibilities and Implications

Does ”Cystic” Biliary Atresia Represent a Distinct Clinical and Etiological Subgroup? A Series of Three Cases