Clavicle fracture is known to be one of the injuries frequently occurring in the elderly. The purpose of this study was to characterise the internal structures that might correlate with the higher incidence of lateral clavicle fracture in the elderly. Twenty clavicles were collected from ten Japanese cadavers ranging from 70 to 99 years (83.6 ± 7.6), scanned, and three-dimensional computed tomography (3D CT) images reconstructed. The clavicle lengths were divided into five equal segments. The four demarcation lines from the acromial end of the clavicle were defined as the observation points A, B, C, and D. The clavicles were then measured and analysed. It was shown that along the clavicles observation point A was the widest and points B and C the narrowest. Regarding the thickness, point D was the thickest among all four points, and there was no significant difference among the points A, B, and C. No male-female difference was found in either the cortical or cancellous bone ratio at all four points. Interestingly, the highest cortical bone ratio was observed at point B and the ratio was significantly decreased toward either end. The cancellous bone ratio was highest at point C and decreased toward both ends. Further observations showed that there were rays of trabeculae around point A, spreading from the superior-posterior edge or anterior edge toward each other and toward the lateral end and point B. Characteristics in the cortical and cancellous bone ratios and cancellous bone patterns might shed light on understanding the fractures in the lateral portion of the clavicle in the elderly. 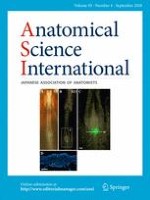 The middle rectal artery arising from the lateral sacral artery

Anatomy of the coronary artery and cardiac vein in the quail ventricle: patterns are distinct from those in mouse and human hearts