Despite bendamustine-rituximab (BR) showed disappointing efficacy in diffuse large B cell lymphoma (DLBCL), it is still occasionally used as first-line treatment in older DLBCL patients instead of recommended R-CHOP. This multicentre, retrospective study was aimed to clarify circumstances in which BR may be justified in this setting. Patients ≥ 65 years with ECOG performance status (PS) ≥ 2 or ≥ 75 years regardless of PS were included. A total of 140 patients were analysed (BR, 68; R-CHOP, 72). BR patients were older (p < 0.001) and were diagnosed more often with high-risk disease (p = 0.03); no difference regarding comorbidities or PS was seen. Compared with R-CHOP, BR was associated with marked inferior overall survival (OS) (16.3 vs. 75.4 months; p = 0.006) and progression-free survival (PFS) (11.0 vs. 62.3 months; p < 0.001). In multivariate analysis, only high age-adjusted Charlson Comorbidity Index (aaCCI) was associated with inferior PFS in R-CHOP patients (hazard ratio 2.67; p = 0.012). Comparing the subgroup of BR and R-CHOP patients with high aaCCI, there was no difference in OS (p = 0.73) or PFS (p = 0.75). Due to the observed non-superiority of R-CHOP in older DLBCL patients with comorbidities, we propose that this subgroup may be treated alternatively with BR, whereas all other older patients are clearly R-CHOP candidates. 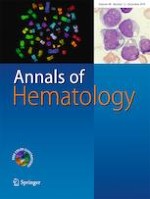 Response to interferon treatment in essential thrombocythemia with inv(3)(q21q26)

Aggressive systemic mastocytosis: a diagnostic challenge in a patient with myotonic dystrophy type 2: a case report