This is a prospective study that included 200 male patients who underwent radical cystectomy and ileal W neobladder for invasive bladder carcinoma between January 1993 and December 2013. The studied patients included 100 consecutive patients who were maintained on regular alkali therapy since surgery and 100 consecutive patients who stopped the use of alkali treatment after initial 3 months postoperative with minimum postoperative observation time of 1 year. All patients had satisfactory function of the reservoirs with normal upper tract. The patients were subjected to blood analysis for creatnine, electrolytes, pH and bicarbonate and urine chemical analysis. The study also included 40 healthy male age-matched volunteers who served as a control group.

Patients with non-complicated ileal neobladders with normal upper tract who were not maintained on alkali prophylaxis for long period have a compensated acid base status. Therefore, the prolonged alkali prophylaxis is not mandatory. 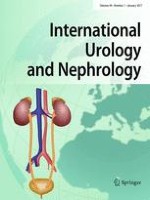 Does the internal inguinal ring need closure during laparoscopic orchiopexy with Prentiss manoeuvre?

Urology – Letter to the Editor

Re: Abdel-Kader MS. Evaluation of the efficacy of sexual intercourse in expulsion of distal ureteric stones. Int Urol Nephrol 2016 [Epub ahead of print]