Determine if conservative surgery of primary solid/multicystic ameloblastoma (SMA) is capable of decreasing the recurrence rate as effectively as radical surgery.

We searched in MEDLINE, Web of Science, Scopus and Cochrane Library for original studies reporting on the conservative or radical treatment of primary SMA and the related recurrence rate. All selected data were independently assessed. Meta-analysis was performed and the Relative Risk (RR) of recurrence with a confidence interval of 95% was the effect measure. P value for the summary effect of < 0.05 was considered statistically significant.

The 2647 records retrieved were reduced to 7 studies to be qualitatively assessed and 4 studies were included in the meta-analysis. RR of 1.88 [0.59, 5.95] of the pooled values pointed that recurrence rate after the conservative surgery is neither comparable nor lower than the radical surgery (P = 0.28).

Conservative surgery does not reduce the recurrence rate as efficiently as radical surgery for primary SMA. However, there is not enough evidence to support this statement. 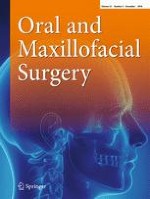 Use of a generic violet light in the surgical management of medication-related osteonecrosis of the jaws: a technical note

The use of intra-articular analgesics to improve outcomes after temporomandibular joint arthrocentesis: a review