Studies on preemptive analgesia in maxillofacial surgery have shown several controversial clinical results, mainly due to the absence of a methodological standard, besides a wide variety of studied drugs. This study intended to answer the following hypothesis: Is the administration of dipyrone preemptively capable of decreasing trans- and postoperative pain in the third molar surgical extraction?

A pilot prospective double-blind placebo-controlled study was carried out with 25 patients submitted to the third molar surgical extraction at two moments, one side in each intervention. Dipyrone (1 g) was preemptively administered (study group) for the extraction of two third molars on the same side and, in a second surgical procedure, dipyrone (1 g) was administered in the immediate postoperative period (control group). Evaluated variables were the amount of anesthetic, pain perceived through the visual analogue scale (VAS) in transoperative and immediate postoperative periods, and over 12-h investigation period, analgesic consumption, duration of surgery, and time to rescue analgesia.

The preemptive administration of dipyrone decreased the perception of transoperative and immediate postoperative pain when compared to its use after surgery only. 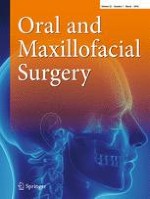 Human bite injuries to the head and neck: current trends and management protocols in England and Wales