Neuromuscular fatigue is a commonly accepted risk factor for anterior cruciate ligament (ACL) injury. It has been proposed that fatigue leads to transient reductions in muscle strength, and deleterious changes in lower limb kinematics and kinetics, during potentially hazardous tasks such as cutting or landing. The purpose of this clinical commentary is to (1) highlight the complexity of fatigue; (2) discuss the theoretical basis by which it is thought to contribute to ACL injury; and (3) critically discuss the evidence underpinning this hypothesis. Despite a significant amount of research, none of the published fatigue protocols appear to have any consistent effect on any lower limb kinematic or kinetic variables known to increase ACL injury risk. On the contrary, fatigued athletes appear to land with greater peak knee and hip flexion angles, and lower landing forces than unfatigued athletes—all of which are considered favourable movement strategies for reducing ACL loading. These data support recent analyses demonstrating no relationship between player workload in training and competition and the occurrence of ACL injury in sport. 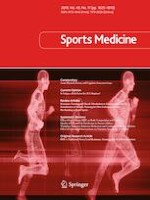 The Effect of Low-Volume High-Intensity Interval Training on Body Composition and Cardiorespiratory Fitness: A Systematic Review and Meta-Analysis