There is little data in the literature regarding the feasibility and limitations of pessary therapy after pelvic reconstructive surgery for symptom recurrence for treating urinary incontinence. Hysterectomy is an important risk factor for failure of pessary fitting. We aimed to evaluate the influence of these prior surgeries on subsequent initial trials of fitting a pessary.

Six hundred and twenty-nine women with symptomatic pelvic organ prolapse (POP) were included in a prospective cohort study from January 2014 to December 2015. All women had symptomatic stage ≥2 POP. During the study period, various types of pessaries were used for the fitting process. 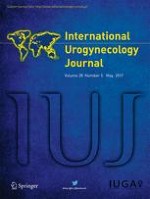 Urethral pressure reflectometry in women with pelvic organ prolapse: a study of reproducibility