Is it Possible to Treat Recurrent Clubfoot with the Ponseti Technique After Posteromedial Release?: A Preliminary Study | springermedizin.de Skip to main content
TOOLBAR 1 2 3 4
SUCHE MENÜ 1 2 3 4

main-content
nach oben
Zurück zum Suchergebnis
​
print
Inhaltsverzeichnis
​
insite
Ausgabenarchiv
​
archive
​
insite
Drucken
​
print
» Jetzt Zugang zum Volltext erhalten
Wichtige Hinweise
Each author certifies that he or she has no commercial associations (eg, consultancies, stock ownership, equity interest, patent/licensing arrangements, etc) that might pose a conflict of interest in connection with the submitted article.
Each author certifies that his or her institution either has waived or does not require approval for the human protocol for this investigation and that all investigations were conducted in conformity with ethical principles of research.

The Ponseti technique for treating clubfoot has been popularized for idiopathic clubfoot and more recently several syndromic causes of clubfoot. We asked whether it could be used to treat recurrent clubfoot following failed posteromedial release. We retrospectively reviewed 58 children (83 clubfeet) treated by the Ponseti technique for recurrent deformity after posteromedial release in three centers. The minimum followup was 24 months (average, 45 months; range, 24–80 months). We determined initial and final Pirani scores and range of motion of the ankle and subtalar joint. Plantigrade and fully corrected feet were obtained in 71 feet (86%); 11 feet obtained partial correction; one patient failed treatment and underwent another posteromedial release. Recurrences occurred in nine patients (12 feet or 14%). Initial Pirani scores improved in all but one patient; severity of deformity was also inferred by number of casts used for treatment. The age at treatment and numbers of casts did not influence the scores of Pirani et al. The scores were similar among the three orthopaedic surgeons.
Level of Evidence: Level IV, therapeutic study. See Guidelines for Authors for a complete description of levels of evidence. 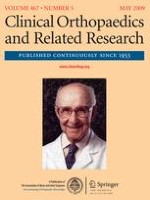 Talonavicular Fusion for Dorsal Subluxation of the Navicular in Resistant Clubfoot

Femoral Component Positioning in Hip Resurfacing With and Without Navigation

Improved Detection of Biofilm-formative Bacteria by Vortexing and Sonication: A Pilot Study