In the most recent Report of the International Committee on Taxonomy of Viruses (9th Report, 2011) (King et al., Virus Taxonomy, Elsevier, New York, 2011) the family Potyviridae is described as comprising seven genera – Potyvirus, Ipomovirus, Macluravirus, Rymovirus, Tritimovirus, Brambyvirus and Bymovirus – despite previous suggestions questioning the validity of the taxonomic status of the genus Rymovirus. Since then the ICTV website records that an eighth genus Poacevirus has been approved for the Potyviridae family. The creation of the genus Rymovirus at the 1990 Potyvirus Taxonomy Workshop in Braunschweig, Germany was based on two things: (i) the incorrect assumption that the genomes of all mite-transmitted members of the Potyviridae would have strong sequence similarity to that of wheat streak mosaic virus, the only mite-transmitted member of this genus for which sequence data were available at that time, and (ii) that the genus should be named Rymovirus (based on a virus for which there was no sequence information) rather than a name based on wheat streak mosaic virus (e.g., “Whestremovirus”) because ryegrass mosaic virus (RGMV) was the first mite-transmitted virus to be described and thus should take precedence. When sequence data for RGMV became available in 1995, these data showed that RGMV was very different from wheat streak mosaic virus (WSMV) and should not be assigned to the same genus. WSMV was subsequently re-assigned to a new genus, Tritimovirus, while the genus Rymovirus was retained. In this author’s opinion, this retention is not justified, and the removal of Rymovirus as a distinct genus in the family Potyviridae is recommended. There may be merit when assigning it to the genus Potyvirus in sequestering these viruses in a rymovirus subgroup, as is done with other potyviruses, to reflect their different mode of transmission.

Titel
Is it time to retire the genus Rymovirus from the family Potyviridae?
Autor:
Colin W. Ward 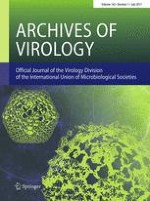 Detection and characterization of hepatitis A virus circulating in Egypt