Is it worthwhile to screen the hip in infants born with clubfeet? | springermedizin.de Skip to main content
TOOLBAR 1 2 3 4
SUCHE MENÜ 1 2 3 4

There is some disagreement about whether idiopathic congenital talipes equinovarus (CTEV) increases the risk of neonatal developmental dysplasia of the hip (DDH). This study aimed to investigate the incidence of DDH in our infants with idiopathic CTEV.

We conducted an observational cohort study over a three-year period to assess the relationship between idiopathic CTEV and DDH. All neonates younger than six weeks with idiopathic CTEV who were treated in our medical centre were admitted to this study. Each subject underwent hip ultrasound examination using the Graf method at the age of six weeks. DDH was diagnosed when a hip was type IIa(−) or worse according to the Graf classification of sonographic hip type.

A total of 184 patients were diagnosed with idiopathic CTEV and underwent hip sonography. In total, seven hips of five individuals underwent treatment (four girls and one boy). The results indicated that 2.7 % of babies (five of 184) with idiopathic CTEV had DDH. However, we did not find any statistically significant difference (p = 0.5776) in the Pirani scores between the DDH group and group with normal hips.

This study revealed that the idiopathic CTEV group had a greater incidence of DDH in comparison with the general population. It is recommended that hip sonography be undertaken particularly in patients with idiopathic CTEV. 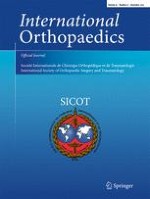 Osteoarthritis: genes, nature–nurture interaction and the role of leptin

Role of mesenchymal stem cells in bone regeneration and fracture repair: a review

Reply to comment on Zhou et al.: Do we really need closed-suction drainage in total hip arthroplasty? A meta-analysis

Reply to comment “Comment on Jugun et al.: The safety and efficacy of high-dose daptomycin combined with rifampicin for the treatment of Gram-positive osteoarticular infections” by Lu et al.

Primary lymphoma of bone: outcome and role of surgery