MKN45 and LS174T models of human gastrointestinal cancer were treated with known mucin-depleting agents in vitro and in vivo, their mucin production was evaluated with Western blot immunohistochemistry, PAS staining and ELISA, and its correlation with cell viability and peritoneal tumor burden was analyzed.

A relationship was found between the viability of cancer cells and their mucin levels in vitro. In agreement, when treated animal models were categorized into low- and high-burden groups (based on the weight and number of the peritoneal nodules), tumoral mucin levels were found to be significantly higher in the latter group.

Tumoral mucin is apparently among the factors that dictate the pattern and extent of the peritoneal spread of gastrointestinal cancer, where it allows for enhanced dissemination and redistribution. If further tested and validated, our hypothesis could lay the basis for the development of novel mucin-targeted strategies. 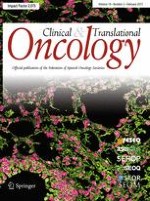 Proteomic modulation in breast tumors after metformin exposure: results from a “window of opportunity” trial