Neutrophil lymphocyte ratio (NLR) could be an important measure of systemic inflammation. There is a lack of knowledge about the neutrophil–lymphocyte ratio in rhinitis. We aimed to determine the relationship between the clinical parameters of allergic rhinitis and NLR in children. 438 children who were diagnosed with allergic rhinitis and followed up in our hospital were included in the study. The control group included 180 control children with no evidence of allergic disease. The immunoglobulin E levels, skin prick tests and complete blood count were measured. Mean NLR was 1.77 ± 1.67 in the study group and 1.70 ± 1.65 in the control group. Mean NLR was significantly higher in children with allergic rhinitis compared to controls (p < 0.05). The patients with allergic rhinitis were grouped according to the severity of AR as Group I (mild group) and Group II (moderate/severe group). No statistically significant difference was present between groups in terms of gender, age, familial atopy, exposure to smoke, the presence of asthma and/or eczema, the percentage of eosinophil, serum IgE levels, number of positive sensitivity, and sensitivity to allergens (p > 0.05). However, NLR was significantly higher in the moderate/severe AR compared to mild AR (p < 0.05). Mean NLR was statistically higher in children with allergic rhinitis compared to the control group. In addition, elevated ratio is associated with the severity of allergic rhinitis in children. Neutrophil–lymphocyte can be used as an indicator of inflammation in allergic rhinitis. But further studies are needed in this issue. 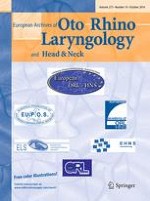