Although some psychiatric anxiety questionnaires include overactive bladder (OAB) questions, there are few controlled data to confirm such an association. We tested the association between OAB and anxiety using a control group of women with non-OAB lower urinary tract symptoms (LUTS).

Patients referred to a urogynecology clinic for LUTS completed two questionnaires: the International Consultation on Incontinence Modular Questionnaire for Overactive Bladder (ICIQ-OAB), and the Generalized Anxiety Disorder 7-Item Scale (GAD-7). Based on ICIQ-OAB scores, patients were dichotomized as having OAB versus LUTS-other, and GAD-7 scores categorized patients as having anxiety. A 2-tailed Fisher’s exact test was used to test the association between OAB and anxiety. Demographic variables were collected and significant confounders were included in a logistic regression analysis. Sample size calculation indicated a need for 100 subjects, but we recruited 105 subjects to account for incomplete questionnaires.

There appears to be an association between OAB and anxiety and it may be of clinical importance to assess for anxiety in patients that present with OAB symptoms. The drop in statistical significance from p = 0.038 to a borderline significance of p = 0.056 in the regression analysis may be a reflection of the sample size. 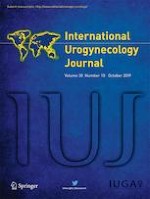 The effect of percutaneous tibial nerve stimulation (PTNS) on sexual function: a systematic review and meta-analysis