Many women develop breast cancer and desire immediate breast reconstruction following mastectomy [ 1]. Implants are the most frequently performed breast reconstruction technique after skin sparing mastectomy [ 2, 3]. Due to insufficient muscular coverage for subpectoral placement of a breast implant after mastectomy, a tissue expander (TE) is inserted in the majority of patients. During outpatient consultations, the TE is expanded repeatedly to create sufficient room for the definitive breast implant.
For patient and cost-efficiency reasons, a single-stage implant-based breast reconstruction (SSBR) would be more desirable than a two-stage breast reconstruction (TSBR). However, single-stage surgery increases the risk of complications [ 1]. Since the introduction of acellular matrix (AM) meshes in 2005, a safe single-stage implant-based breast reconstruction technique using AM might be possible [ 4]. In SSBR, these meshes can provide sufficient coverage for a breast implant where the pectoralis and serratus muscle do not cover the implant if inserted directly after a skin-sparing mastectomy. These meshes could be the missing link to facilitate a SSBR.
Anzeige
Some studies report the use of an AM in the USA in more than 60% of all alloplastic reconstructions [ 5, 6]. Currently, several meshes are used including Strattice™, Alloderm®, and more recent the Meso BioMatrix® [ 7– 9]. Up to now, studies have shown inconsistent results on the risks associated with the additional use of AM’s in both SSBR and TSBR [ 10– 21]. Most studies summarize short-term safety using only one type of AM without a control group. Therefore, at the moment, there is no evidence which AM is the best. In 2013, a multicenter randomized clinical trial was started to compare the clinical outcomes and cost-effectiveness of a SSBR with Strattice™ with a TSBR without the use of AMs [ 22]. Our hospital included 40 patients for this study. After finishing the inclusion period for this study, Meso BioMatrix® entered the market and provided better matrix handling (Figs.  1 and 2), being more flexible and thin while maintaining strength. Therefore, patients who explicitly requested a single-stage procedure received a SSBR using Meso BioMatrix®.
×
×
The aim of this study was to assess the postoperative complications within 1 year associated with the use of Strattice™ and Meso BioMatrix® in implant-based breast reconstruction compared to a control group consisting of a TSBR without an AM.

A single-center cohort study was done. Patients who participated in the BRIOS study at the Maastricht University Medical Centre were included [ 21]. These patients were randomly assigned into one of two groups. One group received immediate Strattice™ (LifeCell Corp., Branchburg, NJ, USA) assisted SSBR after mastectomy. The other group received an immediate, TSBR after mastectomy. Furthermore, a group of patients with immediate Meso BioMatrix® (DSM, Heerlen, The Netherlands) assisted implant-based breast reconstruction post-mastectomy was included. The latter group of patients did not take part in the BRIOS study and was not randomized.
The inclusion criteria for the BRIOS study met the inclusion criteria for the patients who received a breast reconstruction with the Meso BioMatrix®: women with BRCA gene mutation who underwent prophylactic treatment; women with a unifocal tumor smaller than 3–4 cm, intended to undergo a skin sparing mastectomy; willing and able to participate; aged 18 and over; and able to provide informed consent and able to complete questionnaires [ 21]. All patients where operated in the Maastricht University Medical Centre by one of the 12 plastic surgeons between May 2013 and March 2015.
Anzeige
Women with the following criteria were excluded in the BRIOS study as well in the Meso Biomatrix® group: a body mass index > 30 kg/m 2; preferring a breast size larger than cup C; receiving a polyurethane implant; pregnant women; on-going severe psychiatric illness or mental retardation; evidence of alcohol and/or drug abuse; inability to complete questionnaires; a local or general infection which could jeopardize the surgical objective; an extensive local inflammatory reaction; proven or suspected hypersensitivity to materials; immunosuppressive pathologies; smokers; patients that would undergo postoperative radiotherapy.

The Strattice™ and control group received a single preoperative dose of cefazoline; in case of a penicillin allergy, erythromycin or clindamycin was given. The oncologic surgeon first performed a skin-sparing mastectomy before the plastic surgeon performed the SSBR or TSBR. A pocket was created under the major pectoral muscle to place the TE or implant. The cavity was cleaned with an antibiotic solution (cefaroxin 1000 mg/gentamicin 40 mg/betadine). During surgery, a ‘one touch’ technique of the implant was used and a ‘closed door’ policy was implemented to decrease the risk of infection. This means that the prosthesis or TE is touched once and only by the plastic surgeon and that the doors of the operating room remained closed in the period that the prosthesis was unpacked and handled by the plastic surgeon.
In the control group, the TE was placed in the pocket under the major pectoral muscle after which the major pectoral muscle was sutured together with the serratus/rectus fascia so the TE was fully covered by the muscle. After about 3 weeks, the TE will be expanded by multiple sessions of inflation with saline. The speed of inflation depended in particular on the size of the TE and the patient. Regular scheme is 50 cm 3 perioperative fill and 50 cm 3 per 2–3 weeks during the visit to the outpatient clinic. After the desired volume has been reached, the TE will be replaced for the final prosthesis in the second operation.
In the Strattice™ group, a sheet of Strattice™ was placed at the caudal side of the implant, sutured to the inferior margin of the musculus pectoralis major above and the inframammary crease below to complete the total pocket. Before use, the Strattice™ was washed in a saline solution as instructed by the manufacturer. In the Strattice™ group, two drains were placed: one anterior and one posterior to the matrix for at least 7 days. Postoperatively, the patients of the BRIOS study completed a 24-h regimen of cefazoline intravenously [ 21].
Because the Meso BioMatrix® group was not part of the BRIOS study, the operative technique was less standardized compared to the BRIOS study cases [ 21]. The Meso BioMatrix® group received, just as the BRIOS study, a single preoperative dose of cefazoline or same alternative in case of an allergy [ 21]. The ‘no touch’ and ‘closed door’ policy were similar, as was the operating technique to prepare a pocket and placing the Meso BioMatrix®. Before placement of the implant, the cavity and the wound-edges were cleaned with a betadine solution. The use of one or two drains differed between surgeons. The drains were removed with a production of less than 30 cm 3/24 h per drain. Post-operative antibiotic prophylaxis consisted of another 5-day oral amoxicillin/clavulanic acid following a 24-h regimen of cefazoline intravenously.
All patients needed to wear a good fitting sports bra for at least 6 weeks post-operatively. The majority of patients were discharged from hospital with the drains in place. The drains were removed during a visit in the outpatient clinic or at home by nurses specialized in breast cancer care.
The patients included from the BRIOS study were randomized and treated following treatment protocol approved by the medical ethical committee [ 21]. The Meso Biomatrix® group consisted of a chart study. Therefore, this study was done in accordance with the Declaration of Helsinki and good clinical practice regulations.
Anzeige

Statistical analyses were performed using IBM SPSS Statistics [ 23]. The differences in demographics between groups were assessed using a one-way ANOVA for continuous variables and Chi-square tests, or Fischer’s exact tests where appropriate for categorical variables. The proportion of complications within 1 year was compared between groups using logistic regression analysis. As a sensitivity analysis, the results were checked with generalized estimating equations (GEE) which accounts for a possible correlation between outcomes of breasts belonging to the same patient.
Since the expected number of patients with major complications was limited, the group effect was separately corrected for one of the potential confounders. As BMI, age, active smoking, radiotherapy, and adjuvant therapy influence the chance for complications of breast implant reconstructions, these were considered as potential confounders [ 1, 10, 16, 17, 24– 27]. Major complications and explantations were combined, considering the expected low number of events. A p value ≤ 0.05 was considered to be statistically significant.

In this study, 52 patients with 84 breasts were included. A 1-year follow-up was achieved for all patients. Twenty patients (38.5%) received a unilateral treatment and 32 patients (61.5%) received bilateral treatment. The reason for mastectomy was either prophylactic therapy in case of high hereditary risk for breast cancer (56%) or the presence of breast carcinoma (44%). Of all included patients, 21.4% of the breasts received a nipple-sparing mastectomy. A total of 15.5% of all breasts received an inframammary incision and 6% a partial peri areolar incision with a small extension lateral from the nipple. In one case in the TSBR, the tumor excision was incomplete with residual positive margins requiring re-excision.
The TSBR was performed in 36 breasts (43%), the SSBR using Strattice™ in 28 breasts (33%), and the SSBR with Meso BioMatrix® in 20 breasts (24%). In most cases, Eurosilicone implants (89.3%) were placed; Mentor (8.3%), Silimed (1.2%), and Allergan (1.2%) were used as well. All placed implants were textured. The mean volume of the placed implants was 370 cm 3 for the Strattice™ group, 338 cm 3 for the Meso BioMatrix® group, and 80 cm 3 for the TE group. On average, six sessions (with variation from 4 till 11 sessions) of inflation were needed to reach the desired volume in the TE group.
Anzeige
Despite exclusion criteria for smoking and adjunctive breast radiation, 13.5% of the patients were active smokers during the perioperative period and 19.2% of the patients (10 breasts) received adjuvant radiotherapy; this was not significantly different between groups (Table 1). The start of the adjuvant radiotherapy differed between 28 and 192 days (mean 123 days) postoperatively. In six of these, a complication occurred. Except one case, all complications occurred before the start of the radiotherapy. In that one case, the breast received adjuvant radiotherapy 28 days postoperatively; then, 134 days later, an infection occurred with necrosis of the wound edge.
Table 1
Patient demographics of the different groups
*p value between groups were assessed by one-way ANOVA for numeric variables and Chi-square test or Fischer’s exact test for categorical variables. F = assessed by Fischer’s exact test
There was a statistically significant difference in age between the groups. The patients in the control group were older than in the Strattice™ or Meso BioMatrix® group. The patients in the Meso BioMatrix® group were on average younger, had a lower BMI, and fewer patients in this group received adjuvant chemotherapy and radiation therapy compared to the Strattice™ and control group. Thus on paper, the Meso BioMatrix® group was overall a more ideal patient group.

The Meso BioMatrix® group had a significantly higher complication rate than the control group ( p = 0.004) (Table 3). After correcting for potential confounders, the results were similar and remained significant, irrespective of which potential confounder was corrected for. As for major complications, the same conclusion could be drawn with the effect being even larger (OR = 20.8; p < 0.001).

The Meso BioMatrix® group showed significantly more major complications within 1 year compared to the Strattice™ group ( p = 0.020). After correcting for the potential confounders, the results were similar and remained significant, irrespective of which potential confounder was corrected for (Table 4).
As for GEE analyses that accounts for the form of within-subject correlation if a patient had the breast reconstruction of both breasts, the results remained similar in all analyses and therefore yield the same conclusions.

This study was done in accordance with the Declaration of Helsinki and good clinical practice regulations.

Written consent was obtained from all patients included in this study.
Open Access This article is distributed under the terms of the Creative Commons Attribution 4.0 International License (http://creativecommons.org/licenses/by/4.0/), which permits unrestricted use, distribution, and reproduction in any medium, provided you give appropriate credit to the original author(s) and the source, provide a link to the Creative Commons license, and indicate if changes were made. 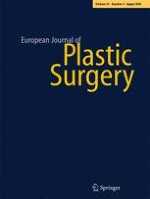 Ricardo Baroudi: an icon of plastic surgery and a dear friend

Correction to: Development and validation of a new assessment tool for suturing skills in medical students

A rotation flap does not rotate

Minimally invasive dorsal sympathicotomies for the treatment of hyperhidrosis: palmar microcirculatory assessment as an intraoperative-aid

The role of body image concern, sexual body image, and sexual self-esteem in the happiness of women seeking rhinoplasty surgery