In the developed world, multiple injury severity scores have been used for trauma patient evaluation and study. However, few studies have supported the effectiveness of different trauma scoring methods in the developing world. The Kampala Trauma Score (KTS) was developed for use in resource-limited settings and has been shown to be a robust predictor of death. This study evaluates the ability of KTS to predict the mortality of trauma patients compared to other trauma scoring systems.

Altogether, 2855 patients were evaluated with a mortality rate of 6 per 1000. Each score analyzed was a statistically significant predictor of mortality. The area under the ROC for KTS as a predictor of mortality was 0.7748 (95 % CI 0.6285–0.9212). There were no statistically significant pairwise differences between ROC areas of KTS and other scores. Similar results were found when the analysis was limited to severe injuries.

This comparison of KTS to other trauma scores supports the adoption of KTS for injury surveillance and triage in resource-limited settings. We show that the KTS is as effective as other scoring systems for predicting patient mortality. 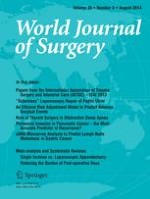 Introduction of an Acute Surgical Unit: Comparison of Performance Indicators and Outcomes for Operative Management of Acute Appendicitis

Revisiting the Guidelines Issued by the Japanese Society of Thyroid Surgeons and Japan Association of Endocrine Surgeons: A Gradual Move Towards Consensus Between Japanese and Western Practice in the Management of Thyroid Carcinoma